The Anna Szenes House in Kibbutz Sdot Yam was reopened in November 2020 and is dedicated to celebrating the character and story of poet and parachutist Anna Szenes, a Kibbutz Sdot-Yam member.

The house is a unique building, based on Bauhaus architecture, which has undergone renovation and conservation and is located in a grassy lush area overlooking the sea.

The Anna Szenes House serves as a visitor and cultural center and includes a number of areas for visitors to enjoy:

History of the Museum

The Preservation of the Museum

In 1945, after learning of the murder of Anna Szenes, the members of Kibbutz Sdot Yam decided to commemorate her memory with a building of life. “Anna Szenes was sent from the group and carried the group’s name,” claimed kibbutz member Zvika Baharia (Behar), who initiated the memorial project. In accordance with the Settlement Commission (1946), the planning of the house was entrusted to architect Shmuel Mestechkin. The museum was part of a complex, which included the structure of Maoz Hayam and the Caesarea Antiquity Museum.

The house was built with local materials and designed in the Bauhuas-style as a elongated, versatile structure, facing the north-south direction and corresponding with the view of the sea. The building has four main wings: a foyer, a central entrance space, two wings to the north and south and balconies. The open stage in the southern part has created a space that merges naturally with the sea, the sand, and the sky.

The cornerstone was placed in a very impressionable ceremony and construction began under the management of “Solel Boneh”. In March 1950, Anna Szenes House was inaugurated, while Anna’s remains were brought to burial in Israel. At the inauguration ceremony, the keys were handed over to Anna’s mother, Katrina Szenes, who opened the memorial room. Anna Szenes House served as the kibbutz’s cultural center, and included a reference room, a library, the Anna Szenes Archive, a music room, the Caesarea Antiquity Museum, a stage for performances, and more.

In 1991, the house became a visitor-and-memorial center.

In 2007, a monument, which stood on Anna’s tomb in Hungary, was brought to Israel and placed in front of the Anna Szenes House.

In 1999, the Anna Szenes Association, a public association chosen to commemorate the legacy of Anna Szenes, was established in cooperation with Sdot Yam, Eitan Szenes, and the Szenes family. Thus began a process that focused on the rehabilitation and preservation of the house, which began to show wear and tear because of its proximity to the sea.

The conservation and construction plans were drawn by architect Gabi Magen from the “Yovatim” architectural firm, who on the other hand faced the challenge of adapting the building to the requirements of a modern display, and on the other, maintained its original appearance.

The project management was entrusted to Arnon Heifetz on behalf of the Council for the Conservation of Sites, who led the planning decisions regarding reconstruction of parts of the house. Conservation and construction work included constructing an auditorium, restoring the open stage in the southern part of the museum, and preserving the music room. They were carried out by the Minister of Jerusalem Affairs and Heritage, the Ministry of Culture and Sports, the Israel Government Tourist Corporation, the Hof HaCarmel Regional Council, and Kibbutz Sdot Yam.

The exhibition, designed by the “Design Mill” and curators Shunit Gal and Yehuda Wegman, presents the life story of Anna Szenes and the Yishuv paratroopers (the 37-paratrooper delegation), of whom Anna was a member. On the open stage was the historical display of Kibbutz Sdot Yam, which celebrated its 80th anniversary.

The museum is closed on Saturday and holidays

The museum is closed on Saturday and holidays

The Anna Szenes House complex in Kibbutz Sdot Yam, apart from being a museum, is also a cultural center and a fitting place for holding conferences, seminars, and a variety of social or family events. The place includes a large auditorium in which it is possible to hold lectures, and screen films and presentations with a sound amplification system, a huge screen, and approximately 100 seats. We also have a sprawling lawn with abundant plants that can accommodate up to 300 people, and a large stage for ceremonies and music and dance performances (which also includes a sound amplification system, lighting, and a large screen). The Caesarea Antiquity Museum complex contains an impressive garden, a lovely lawn, and ancient marble items, such as columns, sculptures, and Corinthian capitals.

Optional activities and events at our complex:

In addition, we cooperate with Kef Yam, which organizes, among other things, beach events for companies and workers' organizations, allowing for a very wide range of possibilities.

For Soldiers and the Security Forces

For Soldiers and the Security Forces

At Anna Szenes House, special importance is given to imparting to soldiers and members of the security forces Anna's story, the story of the paratroopers' delegation, and the values that arise from them. 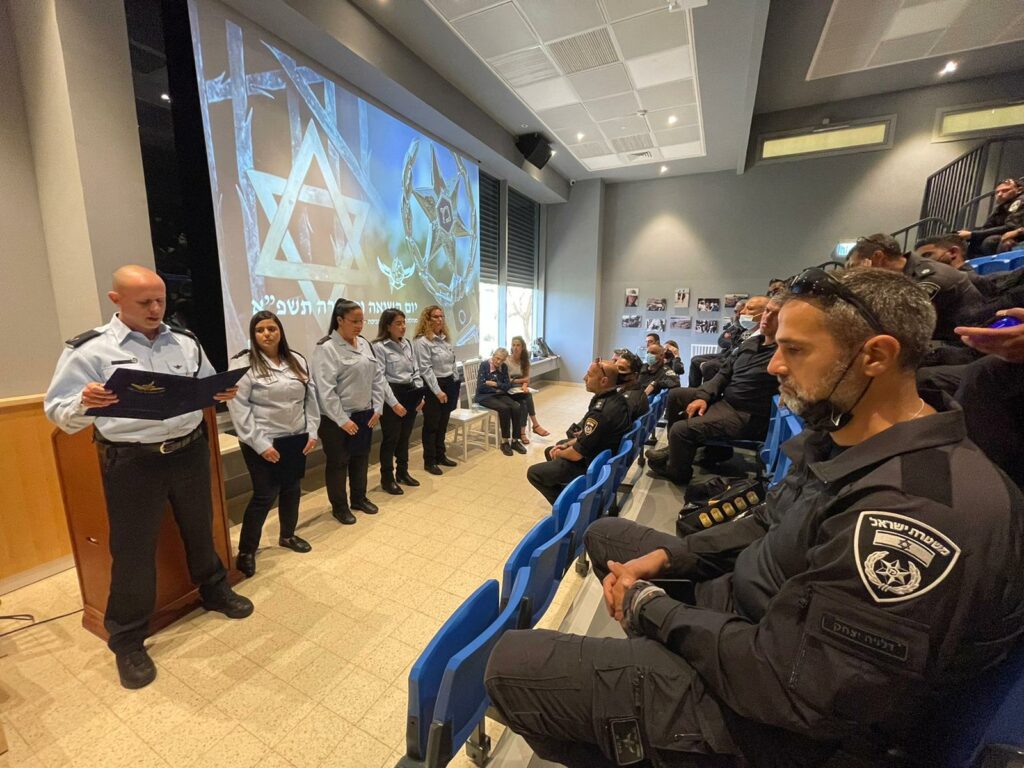 The activities we offer:

At the Anna Szenes House, we place a central emphasis on passing down Anna’s story to future generations.

Anna was an inspirational figure, from whom many values can be drawn, such as perseverance, her ability to give, her volunteering spirit, her assertiveness, leadership, and more. In addition, Anna’s story and letters teach us not only about her private world, but also about the period in which she was active, a formative period in the history of the State of Israel, the Jewish people, and the world.

Tours at the Anna Szenes House are suitable for students from 6th to 12th grade. The tours include a film in the auditorium, a guided tour of the museum's exhibition (adapted to the age group), and discussion circles in which questions, topics, and values rise from Anna's story and character. 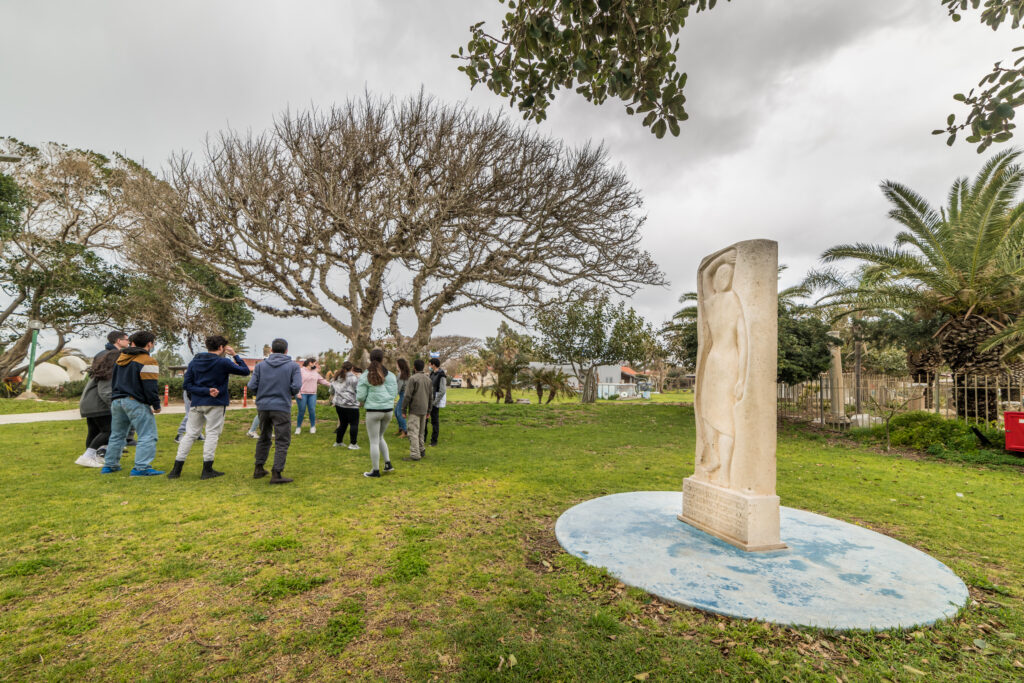 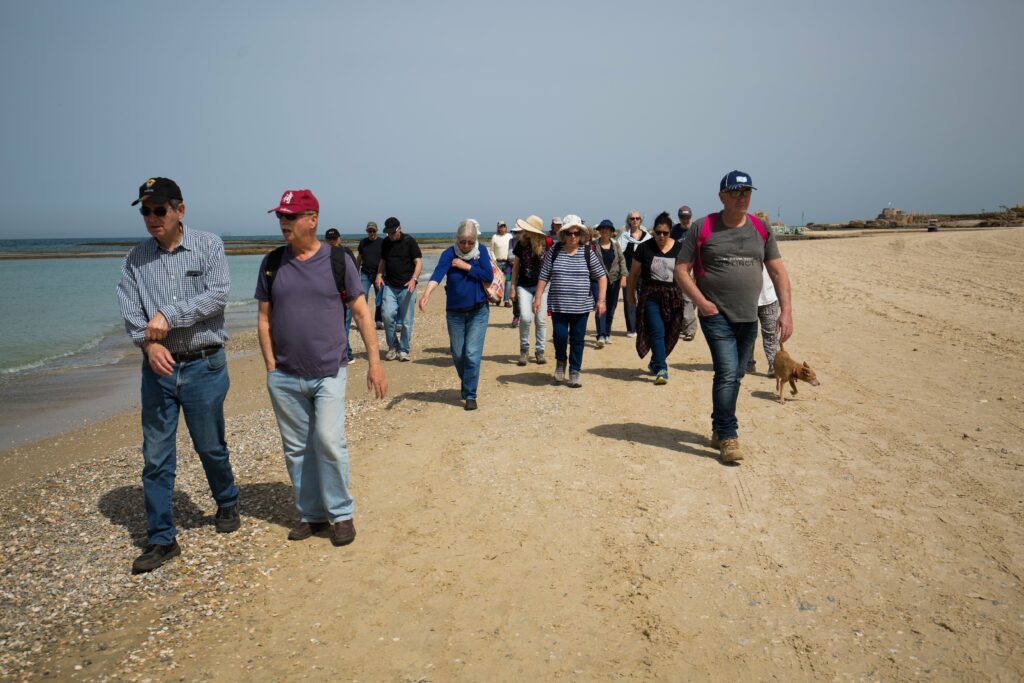 It is also possible to combine a visit to the observation point from the sculpture garden overlooking the sea and the "Walk to Caesarea" coastal route, which follows the footsteps of Anna Szenes, the Palyam (the sea force of the Palmach), and the illegal immigration to Israel toward the end of the British Mandate period.

It is also possible to personally adapt the tour to the visit you’re interested in and choose from the options offered:

A geographical view from the sculpture garden located on a cliff overlooking the sea, which can also include an explanation of the kibbutz and the elements seen in the landscape, such as the Sdot-Yam pier, Herod's Palace, and the rock reefs. The sculpture garden is located about fifty meters from the parking lot and near the dining room. From the observation point, you can continue on foot to the Anna Szenes House, which is a walking distance of about two hundred meters. 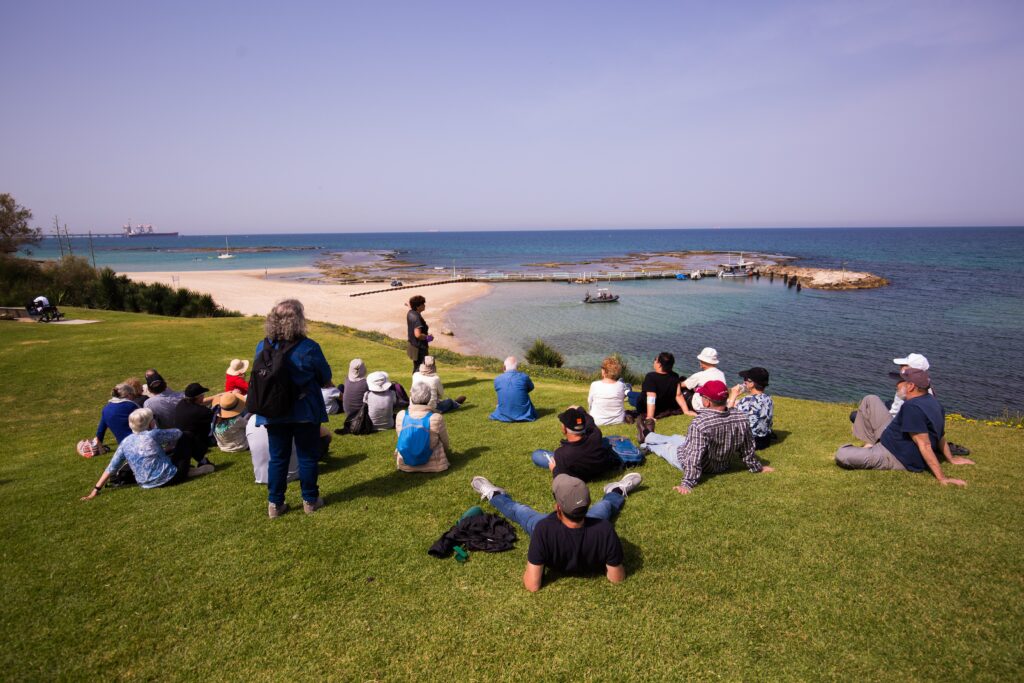 "A Walk to Caesarea" follows Anna Szenes - this route starts at the observation point at the sculpture garden and continues down the path leading to the beach. From there, there's a leisurely walk along the beach (300 meters) up until the path leading to Anna Szenes House. The walk includes a brief explanation of the affiliation between marine nature and man, the story of the illegal immigration to Israel toward the end of the British Mandate period, and the story behind the song "A Walk to Caesarea", which was inspired by Anna's walks along that same beach.

that tells Anna's story, from her childhood in Budapest, her immigration to the Land of Israel, and to her tragic demise in the Hungarian prison. The film includes touching testimonies told by Anna's acquaintances, with authentic photographs, diary sections, and poems. The film concludes with a brief reenactment of Anna and her comrades parachuting into Slovenia, as performed by IDF soldiers in July 2021. 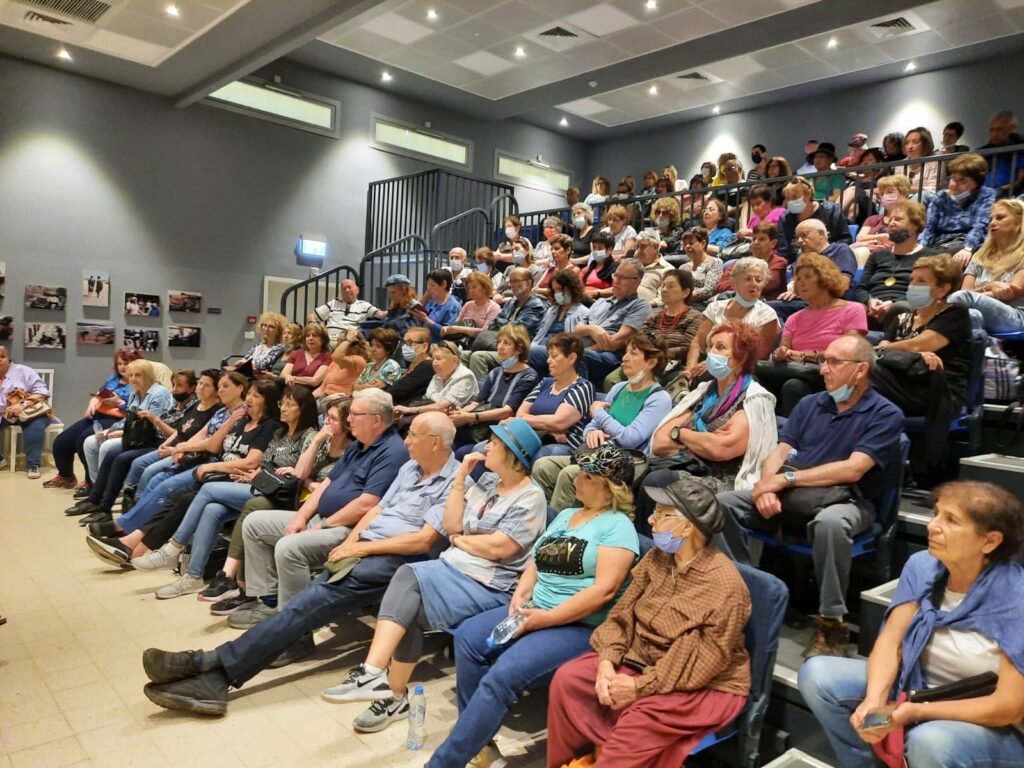 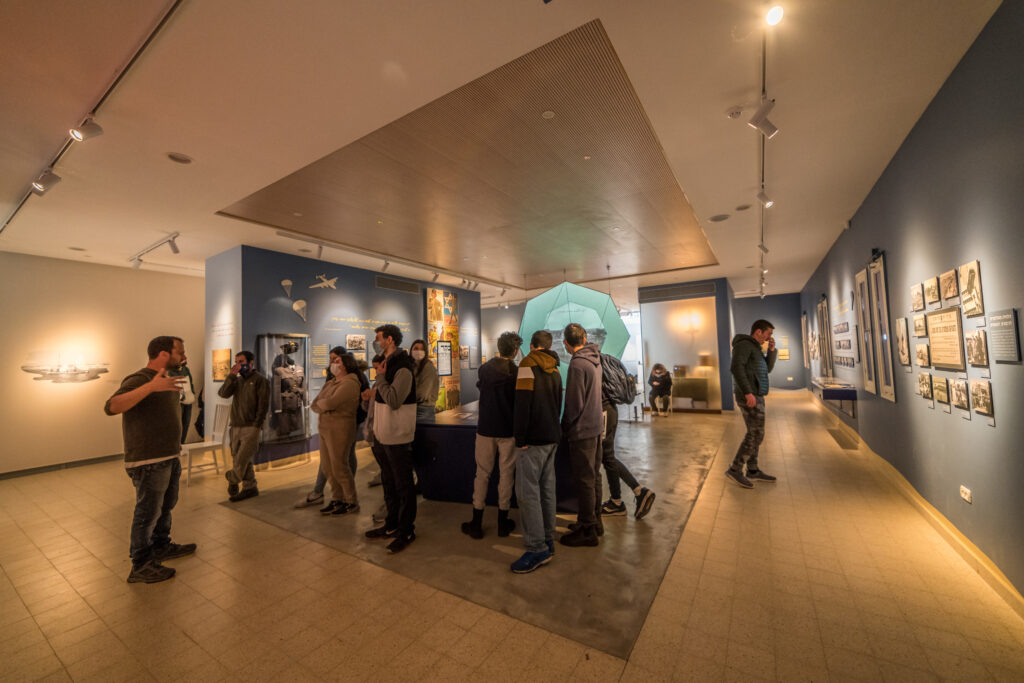 A guided tour of the Caesarea Antiquity Museum

the Caesarea Antiquity Museum in Sdot Yam is an archaeological museum that contains exquisite finds discovered in Caesarea and the region, of all its many and varied periods. The tour includes three different themed exhibition rooms and a large courtyard with sculptures and architectural items, allowing a glimpse of the city's fascinating past and the daily life of its inhabitants. The museum is adjacent to the Anna Szenes House.